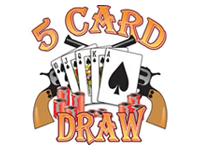 Although there are many different types of poker games, every player has to start somewhere and one of the most common places to start is with five card draw. This is because it is a poker game that is very simple and allows players get up to speed with the game. It is far more prevalent in home play amongst friends than it is online in tournaments or casinos but that is not to say that the game cannot be found online. In fact, it holds a place in the majority of online casino and only variations like Texas Hold ‘Em say they are more popular than the five card draw game.

Easy to play, difficult to master

Like many poker games, although it is easy to learn the rules and nature of five card draw, it can be very difficult to wink, especially when you are up against experienced players. There are obviously tips and techniques a player can learn to develop their skills and give themselves an edge but the best way to get ahead at five card poker is to follow the rules and play regularly. Like most poker games, observing good players at work and then trying to develop your own style around their techniques is a great way to increase your playing skills and start to win some big money at the poker table.

Each player can call, fold or raise after the hand is opened by a player who has placed a bet. Each player that survives is then provided the option to exchange a number of cards for the same number of cards from the top of the deck. Another round of betting takes place and should be started after each player involved in the hand has exchanged their cards or remained with what they hold.

After the betting round is complete, all players that have not folded should show their hands. The rules of five card draw may seem a little convoluted written down but once the game begins, they are very easy to follow and makes for a simple and engaging game of poker. The game also provides a great grounding for players to take on into using on different variations of poker games.